Warning: Use of undefined constant ‘CONCATENATE_SCRIPTS’ - assumed '‘CONCATENATE_SCRIPTS’' (this will throw an Error in a future version of PHP) in /homepages/24/d101390680/htdocs/jdchase/wp-config.php on line 92
 Vouloir: Passion Noire Book One | J.D. Chase
Skip to content 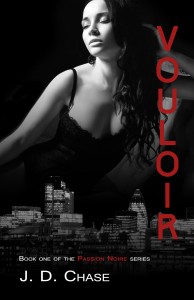 Former Commando, Jones, is used to getting what he wants and he never has to beg. Six feet four. Blond. Eyes of glacial blue. Ripped. Inked. Unmistakably alpha. Dangerously dominant.

Sexual therapist, La Veuve Noire, always gets what she wants but it’s seldom for her own gain. Her motivation is the wellbeing of her clients. She’s the best in the business, having learnt that keeping everyone in her life at an emotional distance is the key to success. That is, until The Kid tumbles into her life and scrambles into her heart. The mysterious, damaged nineteen year old turns her ordered life upside down. She’s known as the Patron Saint of Waifs and Strays for a reason: she gives them hope, and with hope comes healing. She’s determined to turn The Kid’s dark past into a bright future.

The club, Vouloir, is her escape. There she can indulge her own and others’ particular needs. Complications arise in the form of a new member who reminds her of a past she strives to forget. A former Royal Marine. Blond hair. Blue eyes. Unmistakably dominant. Definitely dangerous. He’s locked and loaded. His sights are set: on her.