Warning: Use of undefined constant ‘CONCATENATE_SCRIPTS’ - assumed '‘CONCATENATE_SCRIPTS’' (this will throw an Error in a future version of PHP) in /homepages/24/d101390680/htdocs/jdchase/wp-config.php on line 92
 Hunting Truth: Orion the Hunter Part Four | J.D. Chase
Skip to content 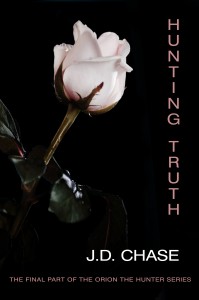 Hunting Truth is the much anticipated fourth and final installment of the kindle top 10 erotica fiction Orion the Hunter series.

Issy Price wakes in a strange bed after walking out on her man after a malevolent stranger pays her a visit, delivering news that shocks her to the core. It seems that Lucas Hunter is not the man he said he was. Can she forgive him for the events that led to her walking out? Maybe everything isn’t as it seems.

In Hunting Truth, we learn more about Lucas’ past that could impact massively on his present … it could even destroy his future. Lucas’ past has well and truly caught up with him. Actions from the past and his need to hunt down and seek revenge could lead to Lucas losing all that he’s worked for. Has he inadvertently brought about his own destruction?

The rock band, Denial, seemed destined for greater things. The hard won tour and possibility of a record contract were theirs for the taking. Surely the past can’t wreak havoc on that too.

And what’s a sex club got to do with it all? It brings out the darker side of an unlikely person for starters!

Can the relationship between Lucas and Issy survive the pressure? Or is the deep, blood-spilled revenge from the past too strong? That decision may just be taken out of their hands …